About May Kesler, PT, Dancer, Choreographer 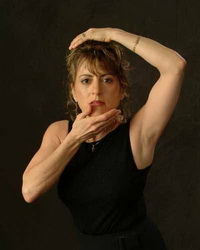 May Kesler, owner of Kesler Physical and Massage Therapy in Bethesda, started dancing with Helena Baron School of Ballet in Paramus, N.J., at age 4, and hasn't stopped studying movement since - for over 60 years!

She then received her B.A. in biology, psychology, and dance from Rutgers College in 1977. She moved to New York, N.Y. to study dance with Twyla Tharp, Merce Cunningham, Peridance, Lar Lubovitch, Doug Varone, David Dorfman, Jennifer Muller and the Works, Limon, Graham, and Zena Rommett among others, and performed in many venues in NYC with various companies and workshops.

She received her Master of Science degree in Physical Therapy from Columbia University College of Physician and Surgeons in NYC in 1982, studying Alexander and Feldenkrais Techniques as well.

May founded the Center for Physical & Massage Therapy in 1984, a private practice, working in NYC, NJ, and then Washington DC area.

She then moved to Washington, D.C. in 1993, where she received her M.A. in Dance from American University. Since then, she has choreographed a production of Fiddler on the Roof for a local theatre company, was assistant director for British Music Hall. May directed and produced a multimedia dance production of Shards of War, her father's story from his book of how he survived the Holocaust. In 2015 she choreographed a version of The Outlander Druid Dance, performed in Williamsburg, Va. Her work is infused with compassion and sensitivity forged by her admiration for her mother, who was also a Holocaust survivor and a Harvard Medical School trained pediatrician, who's story is written here: https://www.amazon.com/GRIT-Pediatricians-Odyssey-Soviet-Harvard/dp/1438944624. Her mother, sadly, passed away from breast cancer when May was a teenager.

May founded Keslerdances, a contemporary dance company, 2015 and has performed her own works in many venues in Washington DC with her company. May has also choreographed several Broadway Jr shows for children's theatre, including Children's Theatre of Annapolis.

May's dancing and choreography is now exploring fusing dance and science, using the information about new anatomy of fascia and the interstitium (Dr. Neil Theise's work) and how it moves with biotensegrity. She is creating educational art videos such as 'Fascia Through the Lens of Dance". This video was screened at the Dance and Science Film Festival in 2019, and was shown internationally to great acclaim at the World Congress of Fascia in 2020.

May recently created an online course in Fascia Through the Lens of dance on body-learn.com, available November 1.

In addition to her work at Kesler Physical & Massage Therapy, choreography, dancing, and dance company support, May is a lecturer and published author. Her article “Healing the Dance” was published in the book Working Wonders edited by Dr. John Upledger in 2005. She was a dance critic for "Stages" in NYC for several years as well.


See the Cinemakers magazine article on May Kesler's dance video and work "Into Blackness" at Outlander's Blackness castle in Scotland! Request an Appointment
Sending...
Your message was successfully sent.
Thank you for your time.